Scotland was never on my list of places to visit when I started out on this adventure. However, when my mom said she was coming to visit and wanted to meet me in London and travel from there, only a few places were along the way to Dublin. We decided to check out Edinburgh and Glasgow and see what Scotland was all about.

Edinburgh is the capital of Scotland and maintains a very old feel to it. There are no modern buildings in the area which gives you a feel of how things would have been back in the day. It was cold and windy but a visit to the Edinburgh Castle was in order to see the crown jewels and relive some ancient history.

We spent a few days exploring and stumbled upon some art by Nicolai Wallner. I have no idea what any of it means but I like the pieces.

We also took a day to explore the zoo. The pandas are on loan from China for 10 years and the female had a failed pregnancy this year. They said they would try again next year. The penguins go out on a daily walk on a strictly voluntary basis (fish and treats are not used to encourage them to exit the enclosure). It was the closest I have ever been to a penguin without any glass between us!

Glasgow in contrast to Edinburgh has plenty of modern buildings all around it and is actually the largest city in Scotland. We were really only there to catch a flight and decided to see Gone Girl after a quick stop at a museum. I found these pieces to be interesting and disturbing all at the same time. The paintings by Monya Flannigan focus on the archetypal image of Eve and give us a different interpretation on the original story. 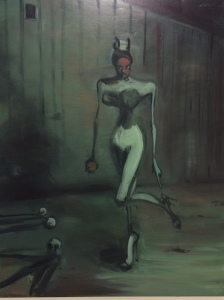 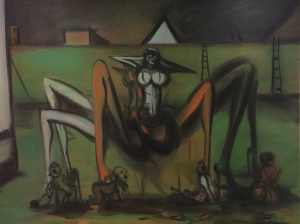 One of the main things I noticed about Scotland was how nice the people were. Everyone just wanted to chat and sometimes I would just nod and pretend I understood what they were saying. If I had to go back, I would absolutely go to Edinburgh again and skip Glasgow.