I was part of the tragedy at LAX on Friday. Read more here if you aren’t aware of what happened. What I saw and experienced made for a long day. When traveling you think you are prepared for anything, until you aren’t.

Below is an account of the craziness that ensued on Friday:

8:30am – Depart to LAX offsite parking. I was told to get to the airport early because my ticket was missing a t in my last name.

9:20am – Load onto shuttle from parking to airport Terminal 7

9:30am – Police shut down traffic from entering airport. At this point I’m about 3 cars back from the police car.

No one knows what is going on so I get onto twitter and look up #LAX. Shots fired in Terminal 3. Status unknown. Planes are grounded and all traffic is being diverted out of the airport. Now what?

9:45am – Jump off the shuttle and walk to Terminal 1. I’m stuck in a crowd of scared people with nowhere to go and the sun blazing.

10:55am – A police officer tells me I can walk across to Terminal 7 for my flight. The deserted nature of the airport was a bit shocking. 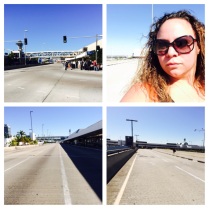 Noon – No update on the flight. We have a pilot and co pilot but the flight attendants are stuck on a bus in parking lot D.

Updates on the shooting are coming in and now we know the shooter has been caught and there is 1 dead with several injured. The airport was still closed to all incoming traffic but people could walk up to the airport.

2:30am – Arrive to my friend’s house exhausted and thankful that the day is over.

The fallout from Friday and the recovery process at LAX is still unknown. Flights were diverted to other airports where they could handle them. Financially, LAX lost a lot of money that day. Emotionally people were scared and frustrated but also came together and shared in the experience together.

There are certain things that will not be in my control while I’m traveling and I’m thankful the attack was not more severe.