Day 5 brought us to our last few sites in Beijing before our flight to Shanghai. We stopped by the Temple of Heaven, the Pearl Shop and the Summer Palace.

At the Temple of Heaven during the winter solstice, the Ming and Qing emperors would perform rites and make sacrifices to Heaven praying for good harvest for their entire empire. The most striking edifice is the “Hall of Prayer of Good Harvests,” which according to the emperor’s Fengshui masters, is the exact point where heaven and Earth met. Built in 1420 this masterpiece of Ming architecture, features triple eaves, dramatically carved marble balustrades, and a gorgeous glazed azure roof that symbolizes the color of heaven. 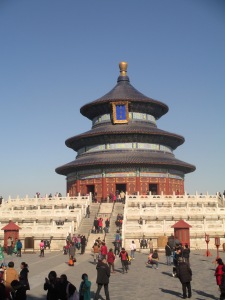 After our visit to the Temple of Heaven we made a stop at the pearl shop for a tour and education all about pearls. China has some of the highest quality pearls in the world due to the ideal climate in Southern China. China was the first country to develop cultured pearls in as early as 1082. If you want to know how to tell if a pearl is real or fake, you can rub one against your tooth and see if it has a gritty texture. However, many retailers may not approve of you biting on their pearls so rub them together and there should be some friction between them. Never get duped again!

Our last stop in Beijing was the Summer Palace which was the summer retreat and playground for the imperial family and royal court during the late Qing dynasty. This is most famous for Empress Dowager Cixi‘s rebuilding of the palace after it was destroyed by the British and French troops in 1860.

Finally, it was time to jump on our flight and head to Shanghai!