France is quite a large country and Southern France has a ton of areas to explore. We chose to take a day trip to Gordes and Bonnieux and we were not disappointed!

Somehow I was appointed to be the driver along this beautiful countryside. I think living in LA gave me the one up on being fearless on the roundabouts. This lovely tree lined road is actually a major highway. 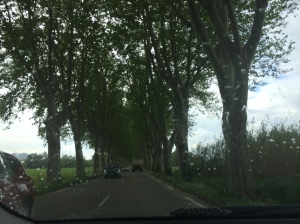 Gordes is a fantastic little village up in the mountains and just absolutely beautiful. We walked around and explored and stopped for a glass of wine overlooking the valley. This is one of those places you can just sit and relax. On our way out, we stopped at Les Caves de La Bastide de Gordes to pick up a few wines and some champagne for the hotel. You know, when in France… 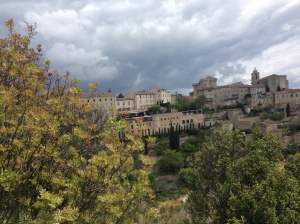 Next up was a little town Southeast of Gordes called Bonnieux. Our intention was to have lunch here, but we were in the odd hour when everything was closed. Instead, we walked around and stopped in a shop and bought some olives, cheese and pate and headed back to the hotel.

Sometimes, the best time can actually be spent in the hotel room. We enjoyed our appetizer and new wine before an adventure into town for dinner. I decided to pick up a little bit of “reading” to enjoy with our wine.

It started raining the second we were in town so we stopped at Brasserie Les Varietes for some foie gras and rose. This region is know for their rose’s and it is almost a must drink when you are here.

Next up was a little tapas bar called Café des Arenes. The owner Xavier, is also the bartender and server and had a place in LA from 1999-2005 called Electric Karma. It was between The Grove and the Beverly Center and apparently one write up in the LA Times gave him all the press he needed. The picture below is of the various famous people that came to his restaurant throughout the years. It just goes to show you what a small world it really is! 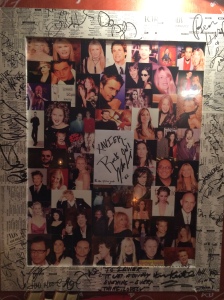