Going into my little Greek Islands trip, I knew that Ios would be a lot different than Santorini. I just had no idea HOW different it would be! We stayed at Far Out which is known as a party hostel and I was prepared to be there. However, when I got there, I realized the average age was probably about 19 and it was like being at spring break all over again. Don’t get me wrong, I can still party with the best of them, but this was just not my scene!

Basically, you spend the day at the pool or the beach and then the pool becomes a dance party around 8:00pm. That was usually the time we played cards or I went and took a nap. Then everyone heads into town to go to one of the many bars and clubs that are around. They have one Euro shots and copious amounts of drink specials. We went out just before midnight the first night and bar hopped. All and all it was a good night but not one that I felt needed to be repeated. 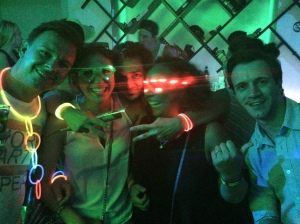 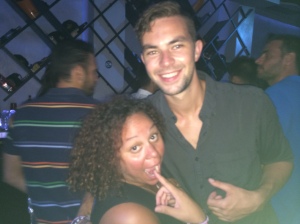 The island didn’t hold the beauty that Santorini did and I am glad I went, but I will not be heading back. However, I impulsively got my ear pierced so I guess I will always remember Ios.

I was attempting to be spontaneous and go with the flow of booking things, and went to book my ferry from Ios to Athens the morning of. Well, every single ferry was sold out! I stood there not quite sure what to do. Do I stay in Ios for another night? Do I get a ferry somewhere else and stay there? I mustered up some tears and told the travel agent that I am traveling alone and already have a hostel booked in Athens and don’t want to arrive late as it is not safe for a girl, and magically I was on a ferry to Naxos (which I would like to spend a few days in) with a 2 hour layover followed by a 5 hour ferry to Athens. The poor guy took such pity on me that I was even upgraded to a cabin!