Featured from left to right:

Light snack with a beverage selection and the dinner, breakfast and beverage menu for review

Cheese platter with chocolate for dessert

Breakfast which is not featured here was a ham and egg omelet with some cheese and a bit of fruit. The beverage service continued throughout the entire flight and there was never a time when a flight attendant was not around to help.

Of course I took advantage of the onboard entertainment and watched Red 2 and Last Vegas. I slept for about an hour which was not ideal, but I woke up and made my connection in Frankfurt and landed in London, without any glitches.

We made it to the flat we were stay and luckily had a local to show us around. First things first, we were told we had to try a bacon sandwich and went to a local favorite called Five at the Bridge. The food was simple and delicious and did not disappoint. Of course the day went on and there were some other things we walked around to, but more of that to come as we actually explore the area.

Next on our list was a little cocktail cheers at the floating boathouse of our friend’s brother. This literally is a house that floats and not like a boathouse like you are probably thinking. There are plenty of spaces still open if anyone wants to buy some water to build a house! 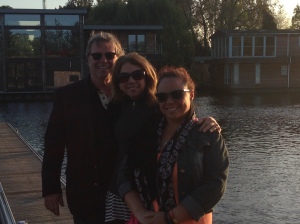 At this point you would think we were getting tired but it was time for a proper beer at a proper English Pub. We went to this great little place called The Albion Pub and sampled a few half pints of fine English beer. I think you can tell Peter is having a good time!

Finally, we had to call it a night and stopped at a local Italian place called Zizzi. This was a quaint little place on the corner and another favorite of the locals.

Considering we just landed this morning, I am exhausted and ready for what London will bring me tomorrow!